WWII and the Siege of Leningrad Tour 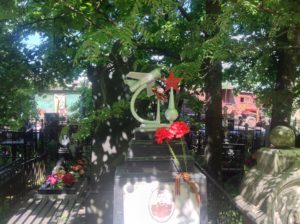 Availability: Currently this tour is available by private booking only. Inquire at info@peterswalk.com.
Duration: 4 hours.
Cost: 13000 roubles*. This covers up to eight people (1625 rubles for for each extra person).

*Please contact us by email for up-to-date price information.

Key stops along the way may include**:
1. The Memorial to the Defenders of Leningrad (admission paid at the door)
2. A siege cemetery where thousands of starved civilians were buried in mass graves during 1941-1944.
3. A soldiers’ cemetery just a couple of kilometres away from the front line.
4. The KV-85 tank memorial
5. The remaining bunkers and tank traps along the old frontlines, just 14 km away from the Hermitage, in the city’s southwestern outskirts.
**Exact itinerary may differ, depending on the guide and the date.

Learn about the heroism of the defenders of Leningrad in the 900 day Siege. For most of the Siege, there was no land link between the city and the mainland. Food supplies in Leningrad were limited to almost non-existence, forcing the citizens to eat glue, rats and anything that they could possibly find. Until today, the exact numbers of victims are not known, but are said to be exceeding 1 million people. Find out about the Road of Life across Lake Ladoga – the lifeline that saved the city.

With a map and explanations provided by the guide, you’ll have a better understanding of the development of the war in the region: where exactly the Soviet, German and Finnish positions were, what the inner defence lines of Leningrad looked like, where the Siege was broken by the Soviet troops.